About two months ago, the Levi’s Music Project made its way to our Malaysian shores for the very first time. Along with mentors Jennifer Thompson and Jin Hackman, the project is now nearing the end of phase 1 with its four chosen finalists (more on the Levi’s Music Project HERE), Alien Lipstick Fire, Margasatwa, Dato’ Maw and MAYABAYU prepping themselves up for what is set to be an unforgettable virtual showcase on 22nd December, 2020. “Choosing only four out of an extensive list of artists at various stages of their journey was extremely challenging but it is not about winners or losers, it is all about recognising and working with the independent music community as a whole. We are so looking forward to assisting and mentoring the chosen artists in their careers any way we can,” said Jennifer Thompson on the finalists.

Gendang got the opportunity to interview Dato’ Maw, a rapper who hails from Penang and is Hell-bent on representing and igniting a movement for Malaysia’s ‘Cina’ Hip Hop music. Intrigued by his philosophy of keeping it real and sharing what the culture stands for and represents as a whole through his craft, which is music, we dig further on his journey thus far.

It’s been quite a shit show, I guess. The silver lining is that it has given me the time to reflect on everything, including my music career, and my personal issues because there is nothing much to do.

Ah, a crap year it has been indeed. You’ve had two successful tours in the form of Planta and Cari Makan. Would there have been a third tour if not for COVID?

Yeah, there was meant to be a third tour this year if it wasn’t because of the COVID-19 pandemic. We were planning to expand the tour to East Malaysia and head to Kuching for the first time and there were plans to make it over to Singapore as well. But, with the pandemic situation, everything had to be put on hold. We are planning to bring it forward to 2021.

We look forward to it! Besides being the first of its kind, what else do you think those tours achieved?

To be honest, I did it just for the sake of doing it. It’s every rapper and artist’s dream to have their own tour, especially in their own country. But organising one isn’t exactly easy and that’s why a lot of people don’t end up doing it or they wait until they get big enough and signed by a label so they get the support to actually do one. In my case I decided, f*** it, just do it. I don’t think I have the time or the luxury to wait until I get signed or get loads of money to do it.

So, the first tour kind of jumped to start the movement. Actually, I don’t know what I achieved because I just really wanted to do it. Not to say the first one was successful but I was clearer of what I wanted to achieve from Cari Makan. Making this so-called Cina music is what I want to do for my whole life so I want to be good at it, so Cari Makan was the theme for the tour. It’s more or less a story of a Cina trying to make it work in the Malaysian scene so I guess the second one has a more solid concept compared to the first one.

Who were some of the people you chose along for the tour?

Usually, I will get friends from overseas and local artists that I look up to and have worked with before.

In 2019 you performed at The Good Vibes Festival at the Boiler Room stage. How did it feel to be part of something global and popularly known for electronic dance music as a Hip Hop artist?

I feel this question so much. The Boiler Room isn’t really popularly associated with Hip Hop but more to Dance and Electronic music. I really didn’t know why I was chosen to perform on that stage but for me, it was a really fun experience. I treated it like any of my usual performances. Seeing that it was still a Boiler Room project, I did feel a sense of achievement. I’m rapping in Hokkien and Mandarin and I’m in Boiler Room. It was a good show with a crazy audience!

2020 has been tough for musicians and everyone else alike. How psyched were you when you heard about Levi’s Music Project?

I’ll be honest, one of the motivating factors was the RM20k grant prize for the winner. This year has been especially slow with no shows, and I’m not really active on social media. I thought, why not just send a submission for the grant, and if I bag it, it’s good but if not, it’s okay too. Because of the pandemic, we’re not getting any booked shows and I think for most Malaysian artists, money is a bit tight so that’s the main reason why I wanted to participate.

How has the experience been so far? Having two mentors like Jennifer Thompson and Jin Hackman must’ve been really great. What are some of the key takeaways you’ve gotten from ‘em?

It’s cool to get insights from people who have a lot of experience in the industry. I usually do a lot of these things on my own and with my team. We don’t really have an insight of how things work. I still appreciate what they have to offer even though they have yet to be fully involved in the Cina scene.

The general knowledge is there and I can absorb it and figure out my own way to fuse it with my style and make it work. That is the perk of the whole Levi’s Music Project. Besides that, we get to work in a professional studio. I’ve been to similar studios but I don’t like some of their atmosphere because some of them can be a bit rigid. The people at Big A Production make me feel comfortable. Even though we still do the recording and mixing on our side, going to the studio, we are able to check the mixes with them. It’s like having fresh pairs of ears (professional ears) for us to get feedback from.

How have the preparations been like for the upcoming virtual showcase?

I’ve never done anything like doing stage set ups to amplify my performance! On a live stage, I heavily feed on the audience’s energy. But, this is a virtual concert and it lacks that excitement from the audience, but we are in the middle of a pandemic so I have to adapt to the new normal. This is my first virtual showcase so we have to amp it up because there isn’t an audience to give us that energy. Performing on your own can be a bit awkward especially with the lack of interaction. Everything depends on the visual aspects of the show, of what the audience sees on their screen. There’s a lot to think about. You seem to be someone completely comfortable having your music be just the way you want it. From metal trap to something a little more downtempo… did you have something in mind next? What are some of your plans?

It’s more or less a phase for me. Every project I put out is a phase of my life. I don’t really stick to a certain genre. For me, Cina is my genre and style so I don’t stick to certain sound selections and drum patterns. The first EP came out because I was quite pissed off at everything at the time. Planta came out because that time I went back to Penang for a year. I was trying to fit in and tone down my anger. I tried to enjoy the smaller things in life and also think about the bigger things I can do. Cari Makan was released in 2019, and it was a good year. So Cari Makan was that year’s feel.

I went to China for Rap of China after winning iQIYI’s Rap of China Malaysia Auditions and I did some shows in Taipei as well. I was working around China and Taiwan, and came back to Malaysia for performances. I was basically working every day and that’s how I get paid. I was legit making money through rap music, spitting to mics. I’m actually working on my album but I’m going to release it phase by phase. My current phase is more on self-reflection, and what I currently feel. I’m not sure what style it is but I guess it’s still basically trap, but not the typical sound. We’re trying to push the boundaries of trap music.

Have you been eyeing any specific producers for your next projects?

There’s one thing awkward about me is that I speak in Hokkien and Mandarin most of the time so from the start my producers understood Chinese. All the producers I want to work with I already have under my collective like jaake and Franco.$. Currently the latest one I’m working with is Saucie J.

If you’re talking about the future, who I’d like to work with, I seriously don’t know. But definitely in the future I want to work with more local Malay artists. At first, this Cina thing came about because I wanted to define that we are not Chinese, we are Cina because we are born in Malaysia and we owe it to the country. I feel like I’ve achieved that already, so the next step is about bridging the gap. I don’t want my audience to just listen to my music and I’m hoping the mass Malaysian audience, who are mostly Malays will want to listen to my music as well.

We understand that you went to Taiwan for a while and one of the things you learned was that they’ve got local support going on for them. Is this still something you feel is lacking here?

I appreciate everyone that supports me but I’m going to be totally honest. Malaysia, especially the Chinese side, is quite toxic. I receive much more hate from them compared to my days spent in Taipei and China. I don’t think it’s a big issue for me but sometimes when you see it, you’re like, what the hell are you thinking? These are the people that write things about you. I’m not sure about the other sides of music in Malaysia but the Chinese scene is quite messed up. We do what we do as long there are a bunch of people supporting us then we do it for them.

I feel like there’s something going on but still in its infancy stage. We’re not just making rap music we’re creating Cina music in general, including pop, R&B, hyperpop and all experimental sounds. The Malaysian Cina rap scene isn’t mature enough because everyone has their own agenda. It’s good to have an agenda but the competition is a bit toxic, unhealthy. That’s what I feel.

Well, you just keep doing you, Maw. Any parting words for your fans and Gendang readers alike?

If you guys are thinking of making music, think twice [laughs]. It’s a life choice. You can try it once and then give up. There’s a lot of things you have to sacrifice including your time and money, even your personal life.

Don’t forget to catch Dato’ Maw along with the three other finalists of the Levi’s Music Project on 22nd December, 9PM on Levi’s YouTube channel which you can find below. 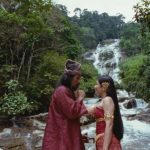