For the first time ever, performing arts juggernaut Enfiniti brings its stage productions to the digital world. Yes, you can watch ‘The Secret Life of Nora’ and more via EnfinitV on vimeo. For only RM25 (USD5.99), you can stream the channel for 48 hours. Access it at vimeo.com/enfinitv 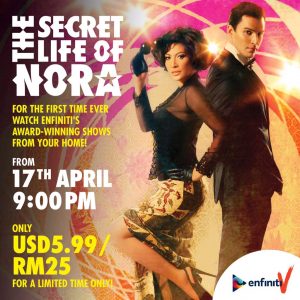 Remember the short film competition by Kuman Pictures that we promoted right here on the Digest? It eventually received a whopping 215 entries. Self-isolation is the mother of inspiration, we say! Watch all of the short films on Kuman’s YouTube channel.

There’s something for everyone online these days. From gigs to charity shows, and even talent competitions. The Jabatan Kebudayaan & Kesenian Negara has a good line-up of competitions for creative sorts offering lucrative prizes. Click on their Twitter account for all the details.