Till I met Blister, I never thought I’d actually have the chance to see a local band perform a Led Zeppelin song, and let alone pull it off pretty damn well too. Nope, it was either reluctantly visit clubs and torment my ears with what the masses call ‘music’ these days, or check out the local live band scene, which while impressive, never really won me over entirely in a way that only a true Rock and Roll band could. All it took was my first ever Blister gig which took place at Quattro (this was back in 2010… holy shit, an entire decade ago), where they threw in not one, not two but three Led Zep songs and other awesome covers to leave me with goosebumps, a mouth wide open, a semi erection and a continuously growing respect for a talented young bunch (now they’re old farts lah) and a splitting hangover the next day. Those shots that used to come in test tubes were killer. To make this first encounter-of-the-Blister-kind seemingly even more fated, the lead vocalist and I share the same Led Zep tattoo on our arms.

If you attended the 7th NewMan Anniversary party that took place back then, you would’ve seen them going all out on stage. If you missed that, then shame on you. It’s more than likely though that you may not know just what the Hell a “NewMan” is (it was a local men’s magazine). But you may also remember them as the opening act for Slash – undoubtedly, a huge and unforgettable milestone in the story of Blister. After a photoshoot I had with the guys, I caught up with them after for some drinks and a chat.

Naturally our interview took place at Backyard – they are after all a Rock and Roll band, and despite their young exterior appearance (again, this was 10 years ago), they’re as old school as it gets. Leather jackets, aviators, silver accessories are just some of what you’d find on them. But you’ll soon realise, they also take after Rock stars in one other very notable way – they never make interviews easy…

“So this was your first ever photoshoot?” I ask them.

“Hueybueakwahhyiyoomnimagwaitongshuishui” was the collective response by the band members. Their response came in the form of ‘synchronised jibberish’. This was gonna be a long and intoxicating interview. After they recovered from one full minute of laughing hysterically and banging the table in delight, they explained that they had planned this act of pure randomness for their interview. How very thoughtful of them. And no, it wasn’t their first photoshoot, to address my question – it was their second, the first one being before the Slash concert. A pinnacle in the history of Blister that they would never grow tired of talking about. And who could blame them? ​A few months before Slash came down, Blister were drinking and just hanging out and casually brought up the topic of Guns N’ Roses reforming and how “f**kin awesome” it would be. “Imagine if they come to Malaysia and we opened for them. We just laughed at the thought. Then Slash came up with his new album, then we found out he was going to Singapore, then we found out he was coming to Malaysia!” explains Mario. Unable to contain their excitement, they jokingly published a status on their Facebook page, “Hey guys, Slash is coming to Malaysia. Pass the word around. Blister should open for him.”’ What started off as wishful thinking, eventually took a turn for the best and they soon heard of a contest by Firefly and Hot FM in which the winner gets to open for Slash at his concert here.

“We thought f**k, this isn’t happening. So we went for the audition and there were lots of good bands. We auditioned and we played Whole Lotta Love, and right after that Sharifah Alia interviewed us. We were crossing our fingers, really hoping that it would happen. Then Ramon got a call on the night of the 29th” says Mario. They were told that Blister and another band were the finalists. “We were so nervous, for the next 12 hours, till the next morning, we were freaking out and all, I think I shat three times” recalls Ramon, with rather unnecessary graphic detail.

Ramon continues, “They called me up the next day and said ‘Okay Ramon, we have Broken Riffs on one line, and Blister on the other… The winner of Bintang Rock Hot FM is …’ My heart was beating so fast! ‘Falls to Blister!!!’ I think I wet my pants, man!”

Mario was in the office when that happened, Julio, the bassist and also youngest member of Blister was in class. “Ramon’s dad called me after getting word, ‘Son… you all won.’ I was like what? Really?! ‘Yes. Balls!’ I started crying, balls!” [everyone roars with laughter]

“It’s like a Walt Disney fairy tale man. Filled with sexual innuendo too, but at the end of the day, it was a fairy tale come true” adds Darian.

And finally the day came, they got to meet Slash. “We acted like total jack asses man,” says Darian while chuckling.

“At first, we tried to keep the whole Rock and Roll look, acting cool and shit, then they announced Slash’s arrival… he came in and we were all acting like retards, clapping our hands like kids and going ‘SLASH! SLASH! SLASH!’” says Mario while re-enacting the whole thing. At this point, I’ve lost count of how many mugs of beer and stout we’ve chugged down.

He then adds, “You know, when you keep on dreaming about something, you want it so badly, at the end of the day, you get it lah. Actually, until now we can’t believe it. We still can’t believe we opened for Slash!” But how did it all start? Initially, they had four members – Ramon, Mario, Joshua and Darian. During one (of the many) very intoxicating Christmas, they got real drunk, ran out of booze and had no idea what to do, so they said ‘F**k it’ and started jamming. Since all of them could play one instrument or another, they went for it. “We went to the jamming studio and played our first song ever – Panties. [everyone laughs] After we played, some studio guys were looking at us and after our jam, they asked us if we’ve played anywhere before…” says Mario.

All of a sudden everyone bursts out laughing (yet again) and it took me a while to realise why – Ramon was showing me his jeans and this huge tear that was near his crotch and then says, “This is cause’ of the photoshoot!” Mario continues after they compose themselves, “After the jamming session, we were having a drink… no, not that kinda drink! We were at a mamak thinking of names for the band, and we noticed all our fingers had blisters. That’s how we came up with the name.”

Reflecting on their past, they also share with me how Ramon was once in the Church choir. “Yeap, and look what we’re doing now! Singing for the Devil!” jokes Mario. [more laughter] “But we do sing some holy songs… Stairway to Heaven!” counters Julio.

It comes off as no surprise though that Blister, which consists of five guys who are all related by blood, would take up music as their passion. It runs in the family – their uncles are from the legendary country band, Os Pombos, and they were the ones who got Blister exposed to music. Now, they expose themselves, as Darian so cleverly puts it.

“We thought we were superstars back then. Once, we got fu**in drunk, went up on stage for Boxing Day, we did shit on stage, played nonsense, couldn’t remember jack shit… came down, hardly remembered what happened and our uncles fu**ed us up. Jerry Singho, the lead singer from Os Pombos said ‘What was that?! You think you guys are stars!?’ That hit us pretty bad, we thought, we don’t wanna do this anymore. But then we watched School of Rock… and we thought, shit, we should do this again,” says Mario.

They then started taking their music seriously and paved their way to where they are today. From gigs at pubs like Backyard to competitions like Blast Off, Blister was slowly but surely maturing and people were starting to give them the recognition and respect they deserved. At the time this article was originally published, their single Blind Love, part of their (then) new upcoming album was even played on UR 105.9 in the Philippines!

“At first when we started off in Backyard where we used to play, the crowd that came to see us were those middle aged people, old school Classic Rock fans. But now when we play, it’ll be a killer mosh pit of young people! It’s good to see that. Like Julio has his college friends coming to see us play, and then they also share with us some songs, ask us to check out this and that. It’s a two-way thing,” explains Mario.

On the increasing acceptance of the band and their music, Darian explains, “Before this, we used to play at functions, where we had to tone down and whatnot, now people come to us for what we are. Like recently, during KLPAC’s My Lingam Speaks, they wanted us to come and just do what we wanna do.”

Taking a poke at commonly asked questions for musicians, I ask them where they see themselves five years from now, to which they simultaneously respond, “The Grammies!” [followed by roaring laughter] And when asked if they think fame would ever change them, Ramon replied with “It would probably make us more drunk lah. But that’s about it” to everyone’s amusement, while secretly garnering more respect from me.

It is bands like Blister that give fans of Classic Rock and fans of music in general, much hope and faith in the local music scene – and a reason to visit bars and pubs on a more regular basis. But seriously though, Rock fan or no Rock fan, one would have to be utterly ignorant not to notice just how seriously these young guys take their music. And what really sets them apart is their level of closeness they form with their fans, staying true to their motto – ‘We bring the Rock, you bring the Roll!’

Since this article was originally published back in 2010, the boys… nein, men of Blister have only gone on to achieve more tremendous success, play for a whole bunch of gigs, festivals and concerts, and receive more much-deserved recognition. Ramon, the original lead guitarist of the band has since moved to Perth, Australia and in his place is Kayvin who seems to fit just right in. Oh, the band also opened for Slash for the SECOND time, and released their first single, ‘Commander’ and from what we know, we can expect more great originals from them coming our way. 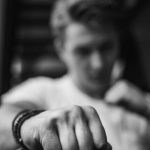